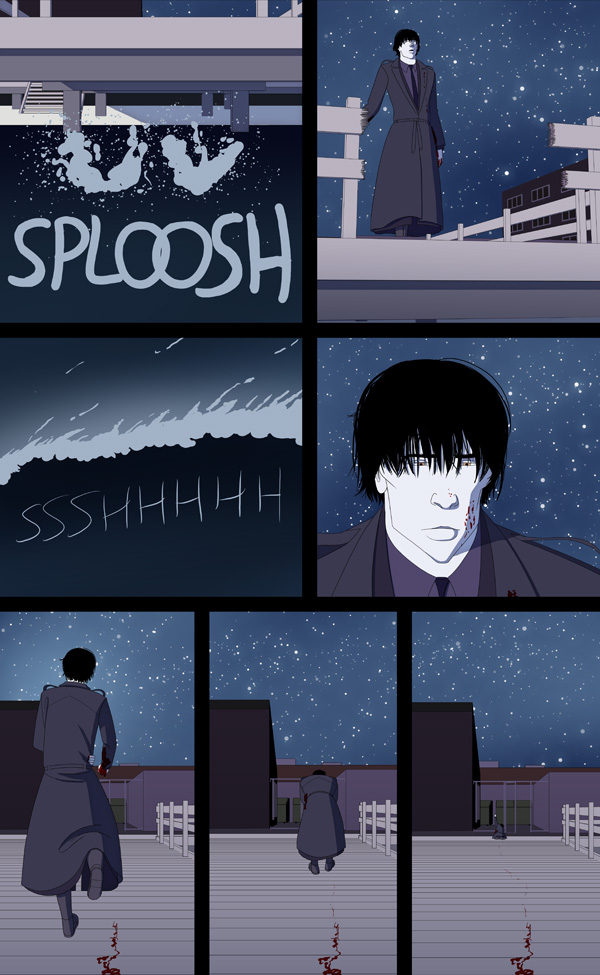 Jonathan
I'm so into this comic I really read it tonight, love it, Tober your awesome, rest up and keep your health as top priority
SlugFiller
At this page, I have to join the previously made statements of others: Shouldn't Eos be right behind that corner? I mean, we're way past the time in which she originally shot Rothwell. Is she simply hiding?
Magic Trees
Is he dead
He's probably dead
Please be dead
ERA
@SlugFiller
Eos went to the same place Emi's sword went a couple pages ago :V
Mr. Jones
I am most interested in the present location of Eos in this point of temporal tomfoolery.
Phlatus
Pulling Charlie and Emi out of the drink? Reuniting (or whatever) with Memnon who's been hanging around invisible all along?
Db3
His blood loss really seemed to stop after a few steps.
Rick
They are hiding under the pier...
jimothy
NEXT TIME ON BSS: CAN ROTHWELL OPEN THE GATE?!?1!?
Tamon
It's really faint as it goes off into the distance, but there is a blood trail all the way to where he is slumped over.
The Frog Master
Rothwell, is it really a good idea to be opening the gate with your heavily damaged hand?
Opus the Poet
Rothwell seems tired in panel 4, maybe feeling the effects of blood loss? And in the last panel it looks like he's collapsing.
memBrain
Great...now Eos is going to have heard the gunshot, come out to investigate, see him lying there and conclude that HE is the victim! Well, at least Charlie is alive, and Eos still has her legs.
Papy
can....can charlie swim?
kNeki_18
Wow this comic is such a cliffhanger if you read it up to date
Alien Hunter
OK, this is the nitpickiest of nitpicks...but shouldn't the stars be exactly the same in all three of the last panels?
Rock
Sooo... Is he ceasing to exist?
Sharo
I'm sensing some Eos action next page. Maybe she'll administer the final blow to old Rothy.
Chad
It appears as though one starscape was made and the last four pans were pasted onto it. I think it is a pleasant effect since the last three are so small and close together.
The Theorist
Nope Rock, I believe he is bleeding out. Losing motor function and consciousness unless he is stabilized. Call an EMT Eos!
Phlatus
Maybe we're finally going to meet whomever sent Rothwell in the first place.
Jerry
@The Theorist: Actually, I think he fell over and time traveled.