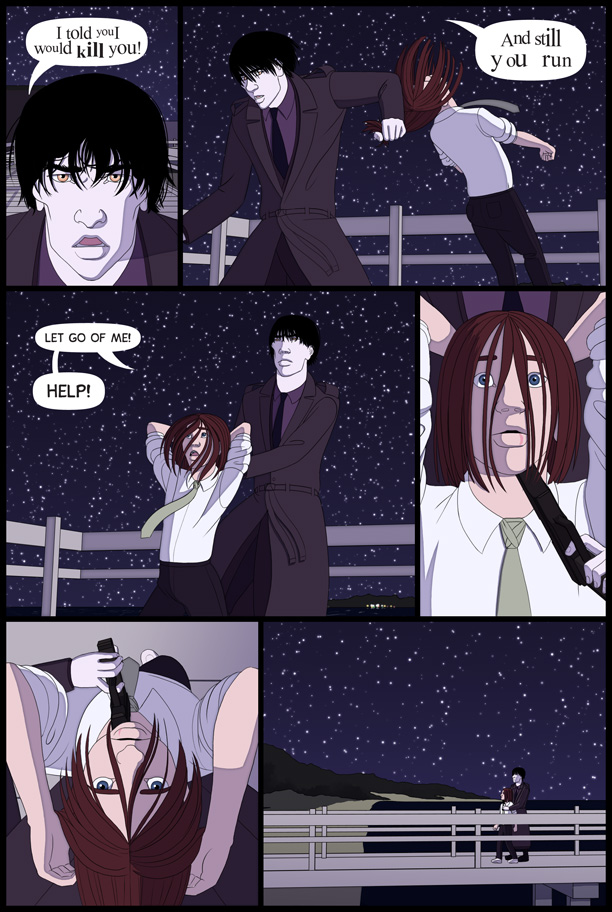 Minno
*Bang*, story over, it was a fun ride.
Whalesharker
Maybe he wouldn't have ran if there was more of a guarantee that he wasn't just gonna get killed later anyway.
Kid Cthulhu
Rothwell pauses on the pier. The theme to "The Good The Bad And The Ugly" starts up as he sees Eos standing there at the other end. Both narrow their eyes and reach for their guns as a bell tolls in the background...
Charidan
Alternate ending: A bullet hole appears in the weird guy's head, and he slumps over. Cut Eos in the parking lot holding the sniper rifle. Roll credits.
Tundra
Why does everyone think Eos could pull the trigger? I sort of assume this man is not baseline human and the trigger is really hard to pull (even if you could find the safety). And I know Eos has that whole Amazonian thing going for her but I don't think she's going to have any accuracy with a gun that has so stiff a trigger. Also, it's poor policy to leave something loaded and since it is fancy future gun I don't think she would find the... breach? The loady thingy.
Kerilithia
And when he returns to the past he is wiped of all memories and the only thing remaining is the sudden unexplained need to cut his hair.
hihowsitgoin
He's gonna monologue first...all villains monologue before they kill the main character so they have a chance to escape.
Deof Movestofca
This would not be a good time to make a comment such as "Oh, yeah, I dare you!" or "Liar!".
SlugFiller
At the end of the last strip, Charlie pauses and seems to be staring at something. Yet, at the start of this one, there's nothing special there. Now, maybe he decided that jumping into the water isn't a good idea, but why is he gawking like that?
Funtastic squirrel
He doesn't want to kill Charlie. He missed deliberately on the last page.
Thread twister
Not only did he miss but ran closer and grabbed him rather than shooting again and now this silly position.
It's just for show, threats to try to maintain control, like the act of taping his arms when leaving him in the car.
He really needs to talk more... And change tack. Less stick, more carrot.
WitUnderPressure
If this comic ceases to exist, then we can probably guess the outcome.
kiraen
Rothwell should have shot him in the foot. That would get Charlie's attention and would make sense considering the comics title. :)
Mr. Jones
Still, I am a tad confused by the twists this comic takes. I'll follow it to it's blood-splattered conclusions, but if only to finally figure out why this doesn't end in a universe splitting paradox (or did it already? I'm never sure with Everett's interpretation in play).
Wally
Mr. 'Baddy' should pay attention to how he is holding the weapon on his captive... if he pulls the trigger, the bullet will pass through Charlie's head and into his own chest. Not so smart Mr. Baddy assassin...
Dotcom
Scary stuff! Great facial expressions! Mr. Creepy-McCreepins obviously was BSing about the killing—or he would have gone and got it over already.
John
@Tundra: I don't think Eos is a baseline human, either. Something is definitely Up with her, and I'm not sure what, but I haven't ruled out the possibility that she is in fact *that* Eos, the Titan, goddess of the dawn.