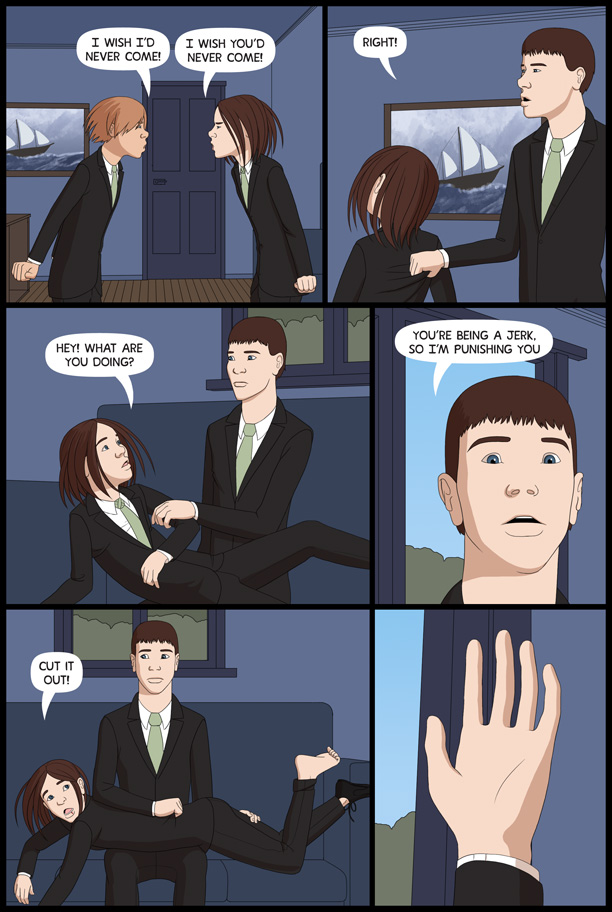 MissTeddy
Stupid holidays got in the way of my reading. All caught up now. Damn. He wouldn't. Quick Ash admit everyone is being a jerk!
Maple
Wait so when (and in what time zone) are these uploaded? It's the evening of the 5th still in Canada
Chronic
Would this not count as self abuse?
Tober
Maple, the comic updates at the beginning of the day according to the UTC timezone.
smoothman
New favorite comic! Keep up the good work!
Anon
@Chronic It's not abuse, it's punishment. There is a big difference. I believe it's called "self-flagellation", if I recall correctly.
shadowrunner2323
lol, spankception
steveha
Hey Charlie: start apologizing right now. That's all Sam really wants.
Joseph
Oh... no...
This is so horrible.
Talk about psychological self-abuse.
This is terrible.
I can't imagine what Sam-him thinks about/feels this-- like, he's numbing himself (further)....
Rock
Hmm... Sam did say he knew his younger self had bad qualities...
myriaddigits
@chronic I figure it'd be more like spanking your twin who is mentally and physically a whole lot younger than you.
@anon self abuse can be anything from punching a brick wall with the intent of self-harm, to taking a razor to your wrist. This is something I had an issue with.
However unless something proves this is all to be one timeline, my opinion on the matter stands to be my response to chronic.
Bowen
@myriaddgits and here I thought self abuse was masturbation...
zhourahl
Violence is always the answer.
That Guy
@zhourahl Violence is not the answer.
It is the question.
And the answer is: yes.
PleaseNote
"This is going to hurt me as much as it's going to hurt you"