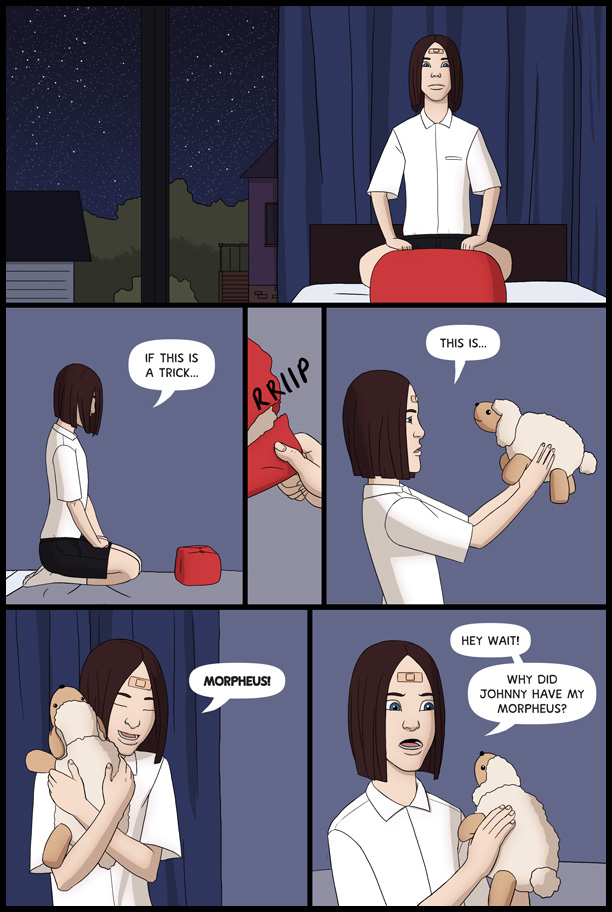 
It's probably a perfectly innocent reason.

Lucky
Morpheus needs added to the characters page. His back story sounds interesting.
Serine
Sheep plush toy is adorable. Got a small grin from the name (Morpheus ^_^).
Rory
(I trysted to stay out of the coments i really did but it feels like ages since i last commented gaaaaah) anyway if the sheep is named after the matrix Morpheus he had that thing for two years that seems like a short time to get a sentimental attachment to a stuffed toy. Also i tried to find a Morpheus quote to make a joke but all his lines are really dry when you look at them on there own
Guesticus
Before "The Matrix", Morpheus was the God of Sleep (where do you think they got the name 'morphine' from?)
Willomo
Huh, that explains why The Sandman was so often called Morpheus. Neat!
Rory
in that case this kid has a deep understanding in interpretation and representation. but i personally learned something today (The More You Know♒★)
Silverback
Wow, Morpheus was first mentioned all the way back on page five. 127 pages later, it makes an appearance.
Johno
Perfectly normal Rapey reasons
VVee
Are we completely sure Johnny isn't from New Zealand?
*shot*
atemu1234
I'm calling Johnny has a younger sibling, to whom Sam gave it to.
Hinoron
Well it's a long story, involving a prank, the ease of uploading photos to the internet in the 21st century, and the many-strips-ago mentioned unfortunate reputation New Zealanders have for doing inappropriate things to sheep.
On a tangentially related note. NEVER visit John's facebook page.