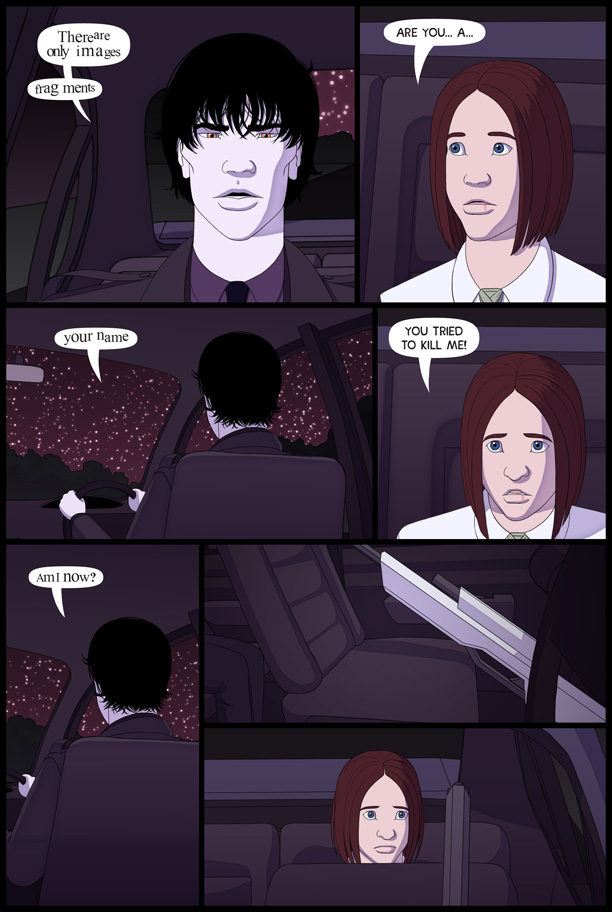 Faust
"I guess I'll find out after you stop the car. Is there a spade in the boot?"
That Guy
Futuristic rifle?
Kid Cthulhu
"whAT iS yoUR naME?"
"John Jacob Jingleheimer-Schmidt!"
"HiS naME iS mY naME tOo."
JLH
I wonder if he talks in fragments b/c he's not completely in that timeline. Since he said "seeing through time" last comic.
Jono
@kid Cthulhu: win
Phlatus
The Time Assassin recognizes DNA, so he can't tell Sam and Charlie apart. (And three people with scars from foot injuries is going to further confuse him. This is "Blood Splattered Socks," y'know.
Rock
JLH - That sounds like a pretty good guess to me!
Yiangos
Ok, here's my shot at figuring out what's happening.
Charlie went forward in time and met himself. This messed up the spacetime continuum (actually, ANY time travel messes up spacetime continuum). The chronoguy is from the future, and somehow doesn't mess up said continuum, because he is NOT changing timelines, he's just glimpsing into Charlie's current one.
He's not trying to actually kill Charlie per se, he's just trying to enforce basic time travel rules ("Don't kill Hitler" type of rules), and apparently whoever gave Charlie The Watch and sent him to the future, made Charlie violate one of those rules. So my guess here is that chronoguy is actually a timecop trying to set things right. For a rather obscure definition of "right", probably.
Justice
Lol Crazy Aussies with the steering wheel on the wrong side.
caribouchat
@Justice Well, technicaly, they're on the right side, because, you know, being mostly right-handed, you wish to be able to use your weapons efficiently if you come across bad guys...
@JLH: interesting idea, but he is enough there to drive! I wondered if he was human? Could be a robot...
Chris the Blue
Okay. Give it too me straight.
Is this guy a Time Cop?