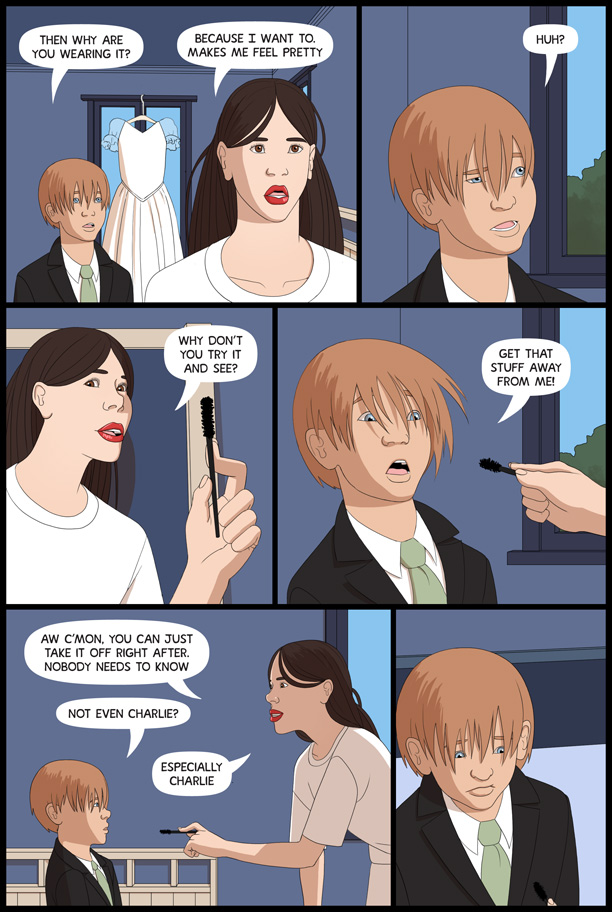 Dafuq
Oh shit son... It's about to get real
shadowrunner2323
something makes me thing Charlie will find out anyway XD
Kid Cthulhu
I can't help thinking Kate is just trying to win Ash's trust so she can get some real answers as to what the hell is going on.
Oh and then suddenly the Chrono-Assassin appears!
ERA
"Because it makes me feel pretty, and keeps me from looking too much like my idiot brother. Seriously, that jerk pranked me on my wedding day!"
ERA-2
Forgot to say: Ash's face in panel 2 is absolutely perfect XD "you say whaaaa?"
L
I think it is awesome that they are accepting of Ash choices. You can be a girl who wears suits! And if you like the makeup, a girl wearing makeup in a suit.
T
I hope the author allows Ash to remain a masculine person. The old story line of one needing some trapping of femininity to be considered "grown up" is sad and teasing along those lines is cruel and negates such a child's identity.
Wally
I can see this exact same conversation happening between Ash and Charlie with Ash handing the makeup to Charlie... "Try it, if you don't like it; it comes right off"... RIIIIGHT.
mra
sharing mascara is a bad idea, she could get an eye infection
Joseph
I believe this is what is referred to as "peer pressure" (except it's adult pressure). :-/
mixed feelings about this.
on the one hand, it seems like if Ash really, solidly said "No" at this point, she would back off.
and it's not entirely bad, getting folks to try new things, come out of their comfort zone.
... like i said, mixed feelings -- i can see it from multiple aspects.
Joseph
p.s. fantastic article on makeup & cultural expectations -- I consider myself a feminist/ally, and I learned, like, a dozen new things from this:
http://nerdatthecooltable.com/2015/10/put-your-makeup-on-so-theyll-like-you/
DonatelloFellow
I love Ash as a masculine female child, she reminds me of myself when I was a kid. I would have reacted exactly the same way. Heck, I'm 18 and I can only recall only wearing makeup three times in my life. But I don't really think it's so much peer pressure here for Ash, Kate's being open and friendly. Merely offering a choice. I think it's mostly a chance for Ash to experiment or at least be more understanding of feminine traits.
DMAN
Meh, one bout of make-up won't change Ash.
Wally
Ash's facial expression in panel six makes me think she is just a little wary of being or feeling pretty.